I have made a several custom missions using the highly buggy KME provided with the game. Treble Trouble has all three armies battling away for supremacy. You have a few Survivor units, from which you must set up a base and then destroy all traces of the Evolved and Series 9. With the Series 9, you lead a Camp Inspection through enemy territories. I’ve added a more recent mission with Series 9 called: Water World. Finally, the Evolved mission: Oil Hunt takes you directly through enemy territory in order to setup a base due south. The first two missions have been remade due to invincible enemy units!

Trash the Evolved and Series 9 camps and destroy their armies. Their armies are strong, but nothing can stop you now! 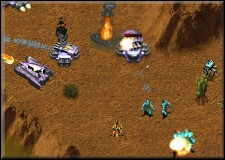 Attempts, the enemies, have been made to weaken and wipe clean a small, but strong Series 9 camp. Punish their insolence destroying their camps. 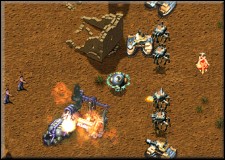 Move your forces across a hostile area to recover oil and resources behind enemy lines or face a watery grave. 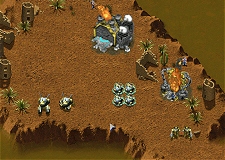 Guide your precious Mobile Derrick through enemy territory and deploy on a large oil reserve in an abandoned base. 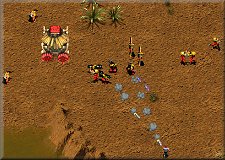 The new Download Bay – Please send in your feedback about this new version of the Download Bay. There will be improvements made based on your comments, so please share your views.

All missions must be extracted to the custom levels folder on your computer, for example: C:\Program Files\Melbourne House\KKND Krossfire\levels\custom\.  If you want to submit your own custom missions for the game, please head to Planet KKND 2 and contact the staff there.

Please contact Nahoo with your comments on all missions posted here.

Go to the top